Do you know how deep the ocean is? Have you ever wondered? We know how extensive it is, but surely you want to know more about its depth.

The sea has always been a point of attention for many people and diverse subjects: Plastic artists, merchants, the military, mythology, painters, singers, athletes, family, celebrations, friends, couples and others.

The ocean is undoubtedly a place of encounters and memories, and also one of the most biodiverse habitats on the planet. The marine space being so extensive, in any region there are different animals and exotic flora.

Although we are in the 21st century there is still much to discover from an archaeological point of view, as there are still lost treasures, shipwrecks, relics and who knows that something else unknown exists.

The truth is that from any point of view, the ocean still holds many secrets, and several of them are located in the depths of the sea.

If you are more curious about information related to the depths of the ocean, stay with us to dive!

Since when are we interested in knowing about the sea?

Since very ancient times, in fact. Over the years, scientists, anthropologists and archaeologists have managed to decipher that the interest of the human being in relation to navigation has many centuries.

We can go back to the great stories of navigation of the indigenous populations in the American continent, the Nordic peoples, the Phoenicians, the Chinese and the Europeans.

And since when do we want to know about the depth of the waters?

Explorers began making navigational charts that showed how wide the ocean was more than 500 years ago. But it is much more difficult to calculate how deep it is.

If you want to measure the depth of a pool or lake, you can tie a weight to a rope, lower it to the bottom, then pull it up and measure the wet end of the rope. In the ocean you would need a rope thousands of meters long.

In 1872, the HMS Challenger, a British Navy ship, set sail to learn about the ocean, including its depth. It had 291 km of rope.

During their four-year voyage, the Challenger’s crew collected rock, mud, and animal samples from many different areas of the ocean.

They also found one of the deepest areas, in the western Pacific, the Mariana Trench, which stretches for 1,580 miles (2,540 km).

Today, scientists know that, on average, the ocean is 2.3 miles (3.7 km) deep, but many parts are much shallower or deeper.

To measure depth, they use sonar, which stands for navigation and sound range. A ship sends out pulses of sound energy and measures depth based on how fast the sound returns

The deepest parts of the ocean are trenches: long, narrow depressions, like a trench in the ground, but much larger.

HMS Challenger sampled one of these areas at the southern tip of the Mariana Trench, which could be the deepest point in the ocean. Known as the Challenger Deep, it is 10,902 meters to 10,984 meters deep, almost 11 km.

How deep can it get?

In general, the ocean is quite deep; however, its bottom is not flat or uniform, which means that the depths of the water in the ocean also vary.

The deepest place in the ocean measures 11,034 meters and is located in the Mariana Trench of the Pacific Ocean, in a place called Challenger Deep.

Because the ocean is a large and difficult place to study, if you search online to find the depth of the ocean, you can end up with a variety of results.

The most recent estimate of the mean ocean depth of 3,682 meters and was calculated in 2010 by scientists from the National Office of Oceanic and Atmospheric Administration (ONAOA), and the Woods Hole Oceanographic Institution using satellite measurements.

While satellite measurements have yielded better estimates of ocean depth than we had in the past, rather than measuring the seafloor itself, satellites actually look at the surface of the sea and detect changes in features like a mountain in the seabed.

Therefore, the image scientists obtain of the seabed is far from perfect and does not have a very good resolution.

A high-resolution seafloor mapping, such as that carried out on the Okeanos Explorer (ONAOA), is needed to adjust the satellite data.

Currently, we have only mapped about 10 percent of the Earth’s seafloor in high resolution, which means that estimates of the mean ocean depth are still just that: estimates.

What are abyssal ecosystems and what do they have to do with depth?

Would you believe that more people have been to the moon than have explored the depths of the sea? It is true!

The mysteries of the deepest parts of the ocean have fascinated scientists for centuries and yet we have only explored a small fraction.

These areas are defined as 6,000 meters or more below the surface and are aptly called “abyssal zones”, after the Greek god of the underworld, Hades.

And I understand why, how on earth could a life withstand the immense pressure and lack of light? Imagine having to balance 100 blue whale tongues on your head … in the dark!

There are currently an estimated 46 of these abyssal ecosystems across the ocean. Most of these are classified as “trenches” and are formed when tectonic plates collide.

With the increase in research and development of new technologies every day, we are continually learning more about these fascinating areas.

Example of the deepest areas of the planet

The Kermadec trench made headlines in 2017 after an unmanned research vessel, Nereus, imploded from high pressure at some 10,000 meters depth.

This trench in the South Pacific acts as a biodiversity hotspot, with large volcanoes and hydrothermal vents inhabited by species found nowhere else.

Past research expeditions have found large numbers of amphipods, crabs, and shrimp.

Located in the Northwest Pacific Ocean, the Kuril-Kamchatka Trench is known for its rich marine fauna, which includes small crustaceans belonging to the superorder Peracarida, and the volcanic activity of the seabed.

In a 2014 study, the German-Russian KuramBio expedition found evidence of plastic debris, including fishing nets, packaging, and microplastics, showing that humans are affecting even the deepest ocean.

The trench is the youngest of the five trenches, it is between eight and nine million years old and has frequent volcanic eruptions.

The Philippine Trench and the surrounding area also contain large deposits of heavy hydrogen, a useful element in biochemistry and nuclear and environmental sciences.

The Tonga Trench is located in the Southwest Pacific around New Zealand’s North Island and the island of Tonga.

Here you can find a large community of worms along with various species of amphipods (small crustaceans).

Additionally, the Tonga Trench is where the Radioisotope Thermoelectric Generator (RTG) fell from the aborted Apollo 13 space mission.

Although the RTG contains plutonium, the US Department of Energy has not found any increase in radiation levels in the trench.

The Mariana Trench is considered to be home to the deepest known point in the ocean, called Challenger Deep.

Using sound pulses, the National Oceanic and Atmospheric Administration was able to estimate how far the Mariana Trench descends.

Located in the western Pacific near Guam, the Mariana Trench is under the jurisdiction of the US.

And it was established as a National Marine Monument in 2009. After some study, including a trip by film director James Cameron (Titanic, Avatar) in 2012, it was possible to identify a wide range of active life in the dark depths.

Flatfish, large shrimp, snails, amphipods, sea cucumbers and even jellyfish have been sighted in the Mariana Trench.

Freezing temperatures, total darkness, and extreme pressure can seem like all the ingredients of doom and sadness; however, voyages and research ships show thriving communities deep in the ocean.

There is still much to learn from organisms in the deep trenches, including discovering opportunities for new antibiotics and drugs.

Although as pollutant levels continue to rise and other threats from activities like deep-sea mining begin to materialize, there is a risk that this valuable information, and the extraordinary life that harbors it, will be lost.

What is the depth of the ocean? Conclusion

Has this article been fascinating to you? If you have any additional comments on this topic or any concerns, we would love to hear from you.

We assure you that now you know a little more about the depths of the ocean, but would you like to have a wonderful experience in the underwater world? Jump into the water with us!

We can give you a very exciting and learning experience with our diving and snorkeling tours to closely observe the incredible Costa Rican flora and fauna. 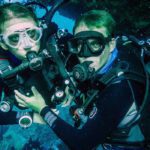 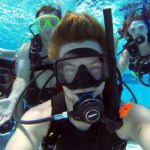 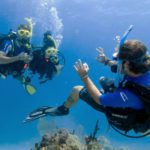